Why did the Celts have no civilization?

They did. Most Celts lived in settled communities and even large towns. Although n  ot as formalised as the Romans or Greeks they had systems of governance and law. They also had distinctive arts and culture and traded goods across Europe.

In the battle of Alesia Vercingetorix was besieged in the city and a relief army of between 80,000 to 250,000 men was defeated by Julius Caesar.

It would need to be an odd definition of civilisation to exclude cultures that have cities and can field armies of 100,000 or more men.

The accounst we have are from the Roman perspective but thats what happens when you lose.

So you don’t think the Celts had no civilization? Well, as a descendant of Celts I find your assertion offensive, Ill-informed and myopic. The Celts have a pantheon of mythic heroes, produced some very beautiful artwork and a legal system under the Druids that was quite forward thinking. Women were allowed to own property, were involved in government and warfare and generally, before the advent of Christianity on a fairly equal footing with males. That sounds like a civilization to me.

Wendy Carolan, Studied the History and Languages of Britain.Answered Aug 31, 2021

You’ve got two misconceptions going on here: the idea of ‘the Celts’ as one homogenised group of people, and the definition of the word ‘civilisation’.

Firstly, the various peoples you refer to as one group didn’t actually think of themselves as ‘Celts’. The Caledonii of northern Britain for example, wouldn’t have thought of the Galati of Asia Minor as the same people. They would have called themselves by their tribal names, and these would not have been the Latin names we now use to refer to them. They would’t have spoken the same language (but as they left very little writing, it is difficult for us to be sure what they spoke).

Because of this, we can only make inferences from what other people wrote about the various cultures. Thus for example Caesar’s ‘Gallic Wars’ exerts a strong influence on our thinking about the continental ‘Celts’, and Claudius’ later conquest of Britannia provided much of the information relating to British tribes. But at no time was there any one one, united ‘Celtic’ group or culture.

With reference to your query regarding the supposed lack of civilisation, this is actually defined as

any human society with well developed social organisations, or the culture and way of life of a society of a country at a particular time. (Cambridge English Dictionary)

It’s probably true that during the last few centuries before 1 CE the Romans and the Greeks thought of themselves as the only civilised inhabitants of the known world. They certainly considered the people who lived to the north as barbarians. And yet the tribes the Romans described had highly organised societies and were skilled craft workers with the ability to make sophisticated iron tools and weapons as well as beautiful objects of art: 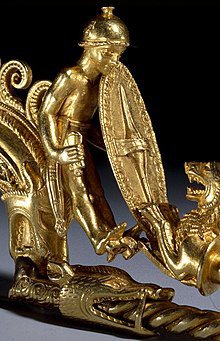 A stunning example of Celtic craftsmanship, the Braganza Brooch was made on the Iberian Peninsular of Spain around 250 CE. This gold fibula features a Celtic warrior and his hunting dogs, with intricate spiralling patterns.

And although the peoples the Greeks called Keltoi, and the Romans Galli, were diffuse and differed in many ways, they did share a common ‘religious’ culture, and spiritual beliefs which included Druidism. The triple spiral (triskelion) symbol probably represented the three realms of material existence: earth, water, and sky and the three worlds: spiritual, physical, and celestial. In later centuries in Britain and Ireland, the symbol took on the meaning of the Christian Trinity: 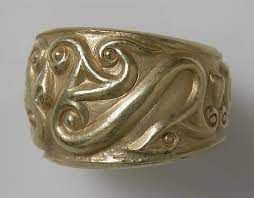 To me, the similar language, plus the shared religious beliefs, traditions and culture seems to fulfil both the Cambridge Dictionary definition and Google’s own description of the word:

the process by which a society or place reaches an advanced stage of social and cultural development and organisation.

They did. Why would you think they didn’t?

By the sixth century, most Celtic civilisations (those that were left), particularly the Irish, which never became part of the Roman Empire, were far more literate, educated and technically advanced than most other European societies.

I think we fail to understand what a civilization is because of the cultural propaganda that rules our society. Creating video games and calling them Civilizations and then feature only Egypt, China, Rome and Greece or understanding Egypt as the absolute ancient climax because of the pyramids might be one of the reasons why we have a hard time to understand our forefathers.

The Celts had something close to a civilization.

Celt, also spelled Kelt, Latin Celta, plural Celtae, a member of an early Indo-European people who from the 2nd millennium bce to the 1st century bce spread over much of Europe. Their tribes and groups eventually ranged from the British Isles and northern Spain to as far east as Transylvania, the Black Sea coasts, and Galatia in Anatolia and were in part absorbed into the Roman Empire as Britons, Gauls, Boii, Galatians, and Celtiberians. Linguistically they survive in the modern Celtic speakers of Ireland, Highland Scotland, the Isle of Man, Wales, and Brittany. The oldest archaeological evidence of the Celts

They may not of had civilizations or cities like those of the Greeks and Romans but they had large scale towns. 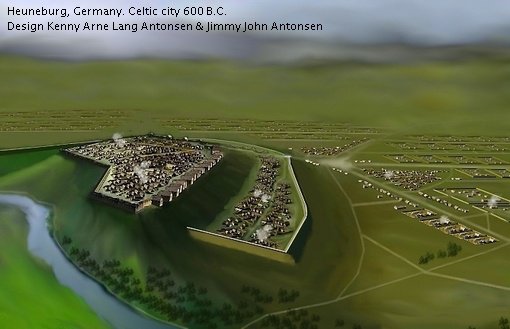 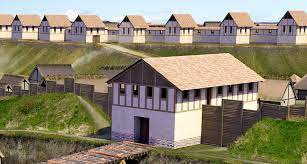 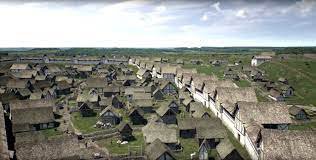 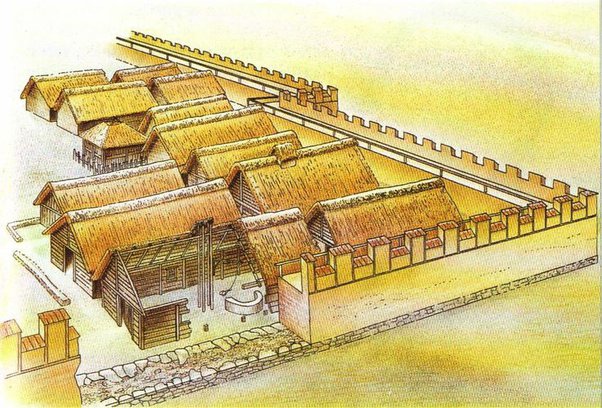 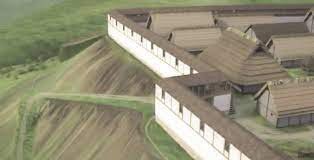 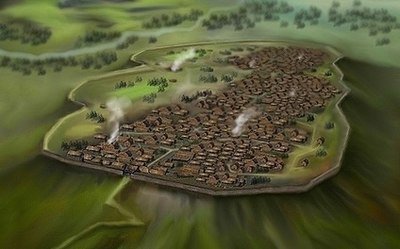 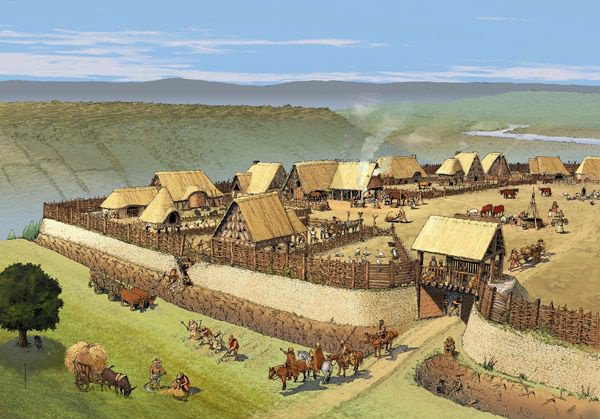 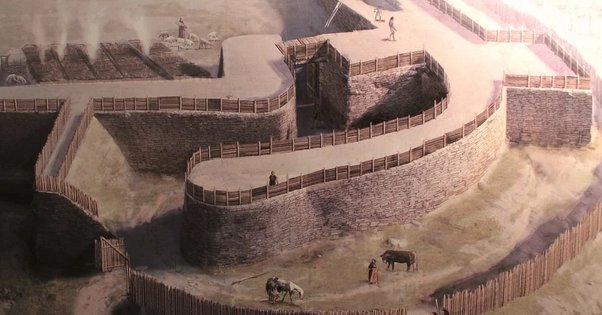 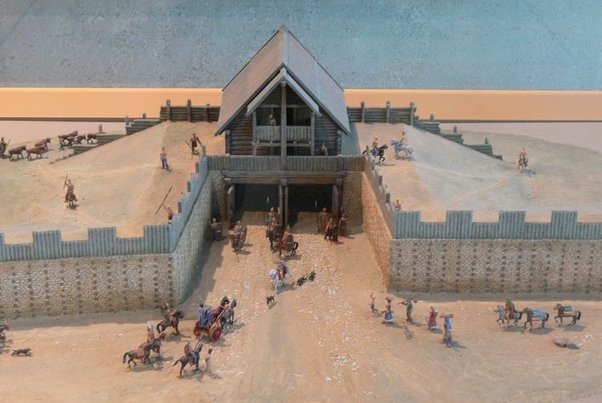 Celtic society was made of several hierarchal groups. At the top were the rulers and elite then the religious leaders the druids followed by the craftsman, farmers, traders, and slaves. 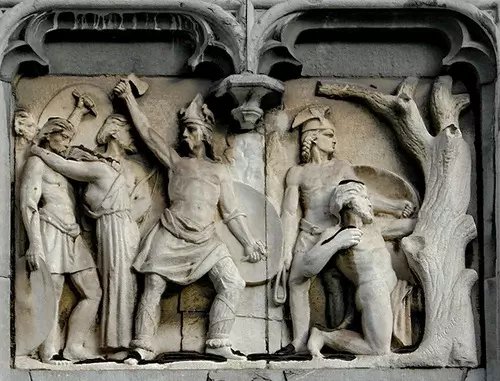 Celts made wonderful art and were great metalworkers. 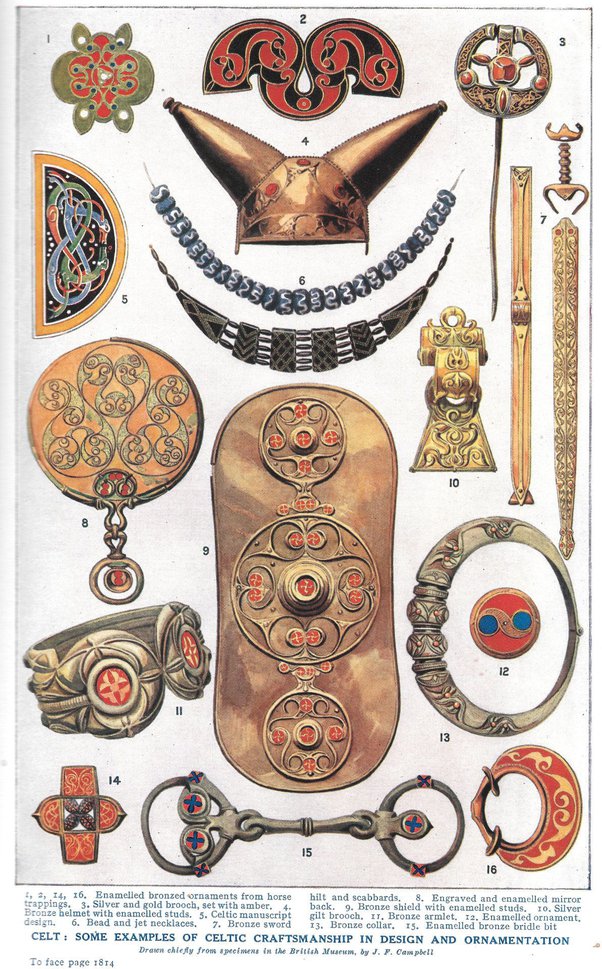 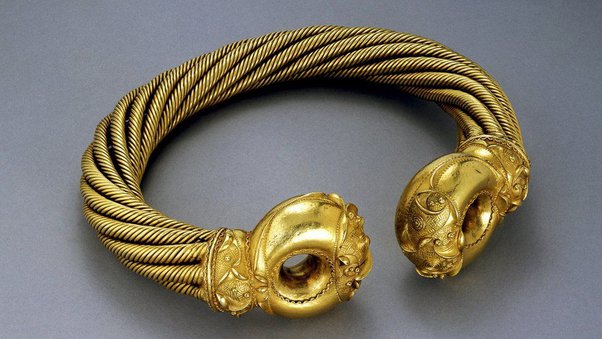 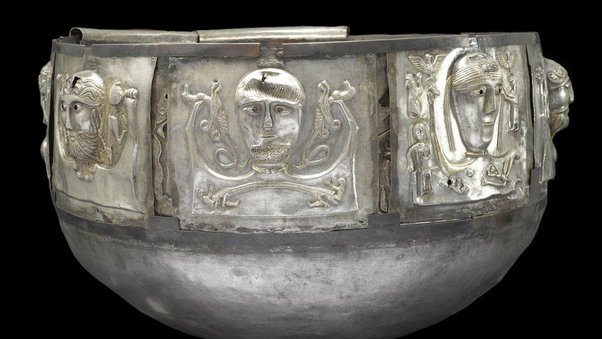 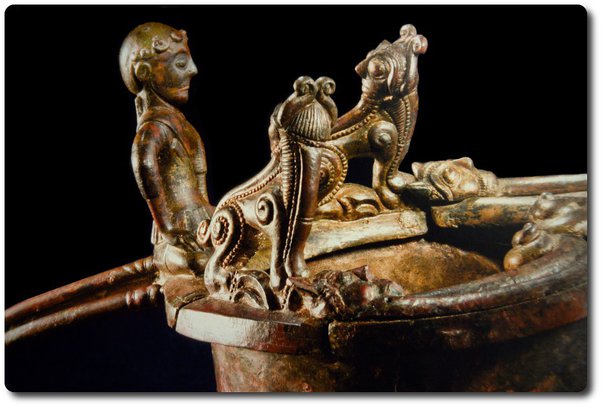 Celts had no civilization? While the Celtics may have not been megalithic builders, stone masons, farmers, or shepherds, it can be argued the ancestors and the descendants of Celtic people had a hand in every ancient and modern civilization.

The ancestors of the Celtic people were some of the first Homo Sapiens to exit Africa at the time that Neanderthals were living in Eurasia. They acquired genes, behavior, and culture from the Neanderthals. Over 34,000 years ago they were mammoth hunters who were living in Sunghir Russia, burying their dead with weapons, rich grave goods, and red ocher.

A paleolithic burial site in Russia challenges us to rethink how Paleolithic humans in Europe treated their dead and organized their societies.

Celtic civilisation has a long well recorded history, ask Julius Caesar for one.

After Rome itself finally collapsed c.480 AD, Europe entered the Dark Ages and literature being produced was nearly non existent and we have precious few manuscripts or even fragments from that time. There was no written vernacular language other than Latin at that time (in Europe only), And Irish, a Celtic language. The Irish monks kept civilisation alive at this time, when there was no such thing as written English or even an English language for that matter or written French, Spanish or Italian, all 100s of year

They did have a civilisation(s). Urbanisation

in Spain, Gaul and Britain preceded Romanisation albeit on a much smaller scale. Coinage also existed in Gaul and Spain.

(Bourges), Cenabum (Orléans), Autricum (Chartres) and the excavated site of Bibracte near Autun in Saône-et-Loire, along with a number of hill forts (or oppida) used in times of war.

Celtic coinage originates from the late 4th century BC to 1st century AD.

Celts did have civilisation though population densities were not enough to support huge cities in the absense of hegemonistic militaristic power. Rome got so large due to raping everyone around it with their military

That is what “celtic” is: a culture, not a race. Civilization, in the way you seem to be using the word derived from a quite outdated classification that had “civilization” as the way of life of city states. This fitted the Near East but not Northern Europe, whose settlement patterns were more dispersed.

actually they had , but before giving you a better answer could you give me your definition of civilisation?

The celts were quite rural and primitive.

Only the invention of the heavy plough in the year 400 allowed Europe to feed enough people to make a civilization.

Also the eastern celts were influenced by the Zalmoxian religion of the Thracians.

What attracted the Celts to Ireland?

At this point no one knows but you should consider also the fact that the Celts were under pressure from the east and kept moving west. Ireland was to the west of lands already

Did the Celts leave any contribution to modern society?

The most obvious and most important one of all: PANTS 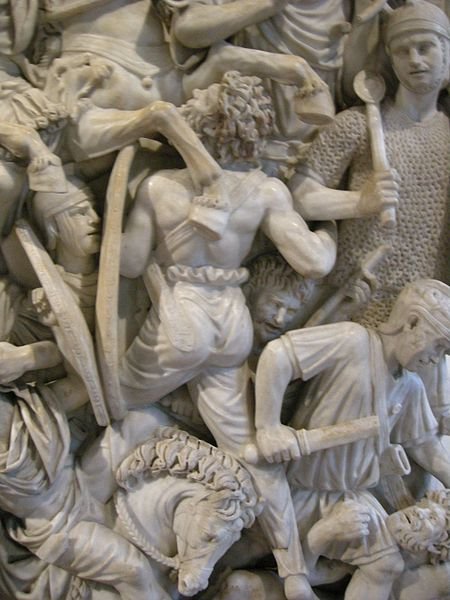 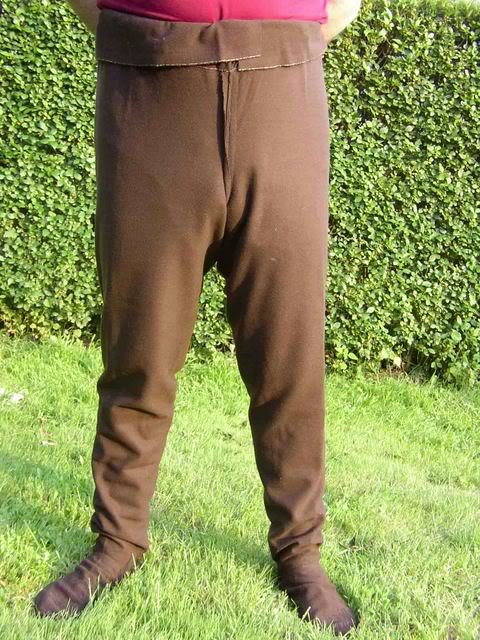 In Europe at least, it was the Celts who invented the modern Trousers while Romans and Greeks preferred larger tunics. For this invaluable invention, I am eternally grateful !

Who were the Celts? Are the ancient Celts the same as the celts in Ireland? If not, how did Celts, as in the ancient tribes throughout Europe, become synonymous with Ireland/Scotland?

The Celts were a group of ancient people who were spread across the European continent and practised a similar culture and spoke similar languages, but who were not unified into a single cultural or governmental unit (like the Romans, for example).

Celts had no civilization? While the Celtics may have not been megalithic builders, stone masons, farmers, or shepherds, it can be argued the ancestors and the descendants of Celtic people had a hand in every ancient and modern civilization.

The ancestors of the Celtic people were some of the first Homo Sapiens to exit Africa at the time that Neanderthals were living in Eurasia. They acquired genes, behavior, and culture from the Neanderthals. Over 34,000 years ago they were mammoth hunters who were living in Sunghir Russia, burying their dead with weapons, rich grave goods, and red ocher.

Why This Paleolithic Burial Site is So Strange (and so Important) - SAPIENS
A paleolithic burial site in Russia challenges us to rethink how Paleolithic humans in Europe treated their dead and organized their societies.
https://www.sapiens.org/archaeology/paleolithic-burial-sunghir/
… (more)
Toda celtia.org está baseada nestas e noutras ideas coma esta
Éamon O'Kelly
, Grew up in Ireland Answered Jun 14, 2020
Related

Who lived in Ireland before the Celts?

Originally Answered: Who were the original people of Ireland before it was conquered by the Celts?

The premise of your question is erroneous. The 19th century myth that Ireland was conquered by Celts has been debunked by recent advances in ancient DNA research, linguistics, and archaeology. The primary ancestors of the Irish people were Bronze Age pastoralists who arrived here about 4,400 years ago. These people (often called the Bell-Beaker folk because of their distinctive pottery) were descended from horse herders from the Pontic steppe who migrated into eastern Europe over 5,000 years ago.

About 2,000 years later, at the dawn of the Iron Age, the proto-Insular Celtic languages took root in Ireland and Great Britain, probably having originated in Iberia. An Iberian Celtic language may have functioned as the lingua franca of a trading network along the Atlantic seaboard of western Europe and the islands. But it seems likely that the language arrived as a result of trade rather than conquest—there is simply no evidence of a Celtic invasion or conquest at all.

The Bronze Age Bell-Beaker folk replaced the neolithic farmers who had inhabited the islands for the previous 1,600 years or so, and whose own origins were ultimately in Anatolia. It is from the neolithic people that we inherited the great monuments of the Boyne Valley as well as stone circles, dolmens and so forth. There is a theory that the neolithic inhabitants were largely wiped out by infectious diseases (plague) carried by the Bell-Beaker folk and their herds, to which they themselves were immune.

The “original people of Ireland” were stone age hunter-gatherers who followed the retreating glaciers after the end of the last age about 10,500 years ago (though there are some traces of possible human activity here from even earlier than that).